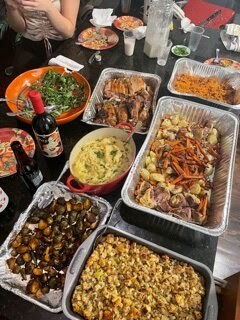 ‘Tis the Season to be Thankful

Each year millions of people from around the world come together with their families to celebrate the Thanksgiving holiday on the fourth Thursday of November. Most families follow traditions that began on the first Thanksgiving, but many have their own traditions that they follow each year.

The first Thanksgiving marks the first successful harvest for the Puritan Settlers who arrived in New England in 1620. The settlers were new to the land and with the help of Tisquantum (better known as Squanto), from the Wampanoag tribe, the Puritans were able to successfully start their colony. After this, the Puritan settlers and the Wampanoag tribe allied to protect each other from neighboring Native American tribes.

One day, shots were heard from one of the Wampanoag camps and it was believed that the Puritans were preparing for war. The Wampanoag quickly alerted their leader, Massasoit, who led 90 men to the settlement to see what was happening. To their surprise, they found that the Puritans were hunting to gather food for a feast they were having to celebrate their first successful harvest. Massasoit ordered his men to hunt some deer and a few days later, the English settlers and Native Americans had a large feast together. The feast lasted for three days where they ate deer, corn, shellfish, and roasted meat. While highly likely, it isn’t confirmed whether turkey was eaten during the feast. This feast passed down from generation to generation and became the holiday we know and love today.

Thanksgiving is a holiday that is meant to be celebrated with family. Most families have the tradition of celebrating Thanksgiving by inviting extended family to a big dinner on Thanksgiving night. Many students at La Jolla High have the same routine of eating a Thanksgiving dinner with their family but each student has a unique tradition that only their families do.

For example, senior Clare Spilkin has a cranberry sauce competition with her family to see who can make the best sauce. “Each year my family will make different cranberry sauces, mine are always the best.”

It was the highlight of my year and I would recommend it to everyone.”

While some families eat a big Thanksgiving dinner with their family, others will take advantage of school break and go traveling. A common place the families of La Jolla High School will go to is Mammoth. Being only a few hours’ drive away, it is an ideal destination to spend a few days off up in the mountains.

Sophomore Andre Zarev was one of the many La Jolla High School students that went to Mammoth during Thanksgiving break with their families to celebrate the holiday. “It was fun. We did a lot of family activities together like skiing and eating dinner together.”

Freshman Brody Layson also took an adventure to Mammoth during the break. “It was the highlight of my year and I would recommend it to everyone.”