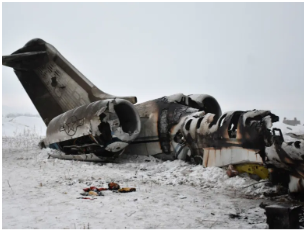 An American military aircraft was supposedly shot down on January 27th in Taliban-controlled territory of Afghanistan. The plane was a Bombardier E-11, an advanced communication aircraft used by the military in Afghanistan to help ground troops communicate with other American personnel and aircrafts. The aircraft was initially believed to have been shot down by enemy fire. After further investigation, officials are pinning the crash on a mechanical failure instead of being shot down. Two U.S. military pilots died in the crash and their bodies have been recovered. Pinpointing the cause of the crash is a difficult task, due to the location of the crash in hostile enemy territory.

The U.S. military had to carefully remove all the remnants and move them to a neutral territory. Junior James Dessert said, “They made the right choice in getting the plane out of the area. It would make no sense if they risked more lives just to find out how they died.” According to U.S. Forces in Afghanistan, the remains of the plane have been recovered by U.S. military, who later destroyed the remnants of the aircraft. Junior Tahseen Hussain said, “I don’t understand why they would destroy the rest of the plane, especially if they don’t know what the cause of the crash was.” The cause of the crash is still an ongoing investigation.