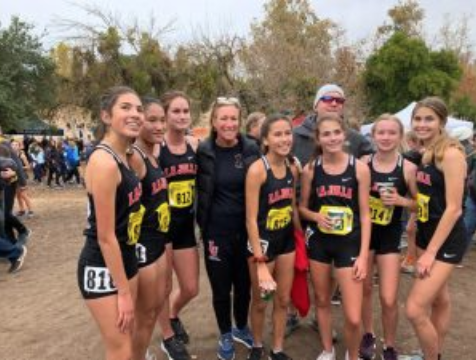 Our girls cross country team has soared to incredible heights and they plan on going even higher still. Despite the varsity girls cross country team having no seniors this year, they made it to the CIF State Championships and placed #19th as a team. This achievement was not made with luck, but rather through many hours of hard work, determination, and motivation from Coach Mandy and the athletes.

In Sophmore Katie Frost’s words, who placed 128th in State, “Coach Mandy got sadistic and really increased the difficulty this year, which helped us reach our goal of [making it to] state.”  The team’s new momentum and efforts have hurled them to accomplishments they have not seen in 11 years, when they last went to state. According to Junior Monica O’Brien Saez who placed highest on the team at #62nd, “We had a lot of newcomers this year but we started out really well in the season.” Saez went on to describe how the state meet went, “Despite the cold, we did really well and were close to our best time.” The girls team is looking forward to continuing this momentum and placing even higher in state and in their own personal records.